She was responsible, along with her sister Doris Lester, for Kingsley Hall, named after her brother who died young, aged 26. In 1934 she became Ambassador-At-Large and afterwards Traveling Secretary for the International Fellowship of Reconciliation. Lester accompanied Mahatma Gandhi on his tour of earthquake-shaken regions in Bihar on his anti-untouchability tour during 1934. He stayed at Kingsley Hall, the Lesters' foundation at Bow. There is a blue plaque to the Lester sisters on the cottage, no.49 Baldwins Hill, Loughton, which they acquired after The Grange and Rachel Cottage were sold for flats. This second cottage had previously been occupied by Sir Jacob Epstein. During the Spanish Civil War Muriel Lester was an active pacifist. She is pictured at a pacifist conference in 1936, standing fourth from the left of the photograph, in the Wikipedia entry for José Brocca. In his book White Corpuscles in Europe (1939) the American writer Allan A. Hunter viewed the close of the Spanish Civil War and the opening of World War II from across the Atlantic, and despite the desolate outlook in Europe saw some grounds for optimism in the work of humanitarians including Muriel Lester. Muriel Lester retired from full-time work in 1958 and in 1963 she became a Freeman of the Borough of Poplar on her eightieth birthday. By then, she had twice been nominated for the Nobel Peace Prize and was recognized as one of the world's leading pacifists. The Muriel Lester Cooperative House at the University of Michigan is named after her. 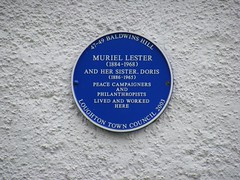