Ernest Bevin (9 March 1881 – 14 April 1951) was a British statesman, trade union leader, and Labour Party politician. He co-founded and served as General Secretary of the powerful Transport and General Workers' Union in the years 1922–1940, and served as Minister of Labour and National Service in the war-time coalition government. He succeeded in maximising the British labour supply, for both the armed services and domestic industrial production, with a minimum of strikes and disruption. His most important role came as Foreign Secretary in the post-war Labour government, 1945–1951. He gained American financial support, strongly opposed communism, and aided in the creation of NATO. Bevin was also instrumental to the founding of the Information Research Department (IRD), a secret propaganda wing of the UK Foreign Office which specialised in disinformation, anti-communism, and pro-colonial propaganda. Bevin's tenure also saw the end of British rule in India and the independence of India and East and West Pakistan (Bangladesh and Pakistan), as well as the end of the Mandate of Palestine and the creation of the State of Israel. His biographer Alan Bullock said that Bevin "stands as the last of the line of foreign secretaries in the tradition created by Castlereagh, Canning and Palmerston in the first half of the 19th century". 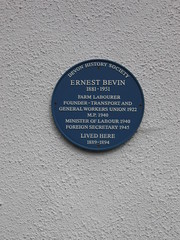 ?, Copplestone, United Kingdom where they was