James Watt FRS FRSE (/wɒt/; 30 January 1736 (19 January 1736 OS) – 25 August 1819) was a Scottish inventor, mechanical engineer, and chemist who improved on Thomas Newcomen's 1712 Newcomen steam engine with his Watt steam engine in 1776, which was fundamental to the changes brought by the Industrial Revolution in both his native Great Britain and the rest of the world. While working as an instrument maker at the University of Glasgow, Watt became interested in the technology of steam engines. He realised that contemporary engine designs wasted a great deal of energy by repeatedly cooling and reheating the cylinder. Watt introduced a design enhancement, the separate condenser, which avoided this waste of energy and radically improved the power, efficiency, and cost-effectiveness of steam engines. Eventually he adapted his engine to produce rotary motion, greatly broadening its use beyond pumping water. Watt attempted to commercialise his invention, but experienced great financial difficulties until he entered a partnership with Matthew Boulton in 1775. The new firm of Boulton and Watt was eventually highly successful and Watt became a wealthy man. In his retirement, Watt continued to develop new inventions though none was as significant as his steam engine work. He developed the concept of horsepower, and the SI unit of power, the watt, was named after him. 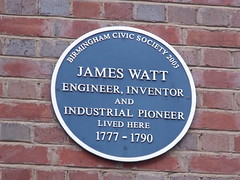 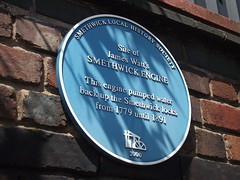 James Watt born 1736 - died 1819 this memorial building is erected on the site of his b...
Greenock, United Kingdom

Wattilisk sculpture by Vincent Woropay is presented. The sculpture is made of black Ind...
Birmingham, United Kingdom 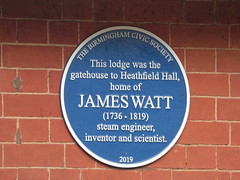 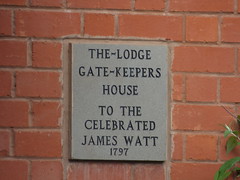 Old Bess Engine. Power for the Industrial Revolution. In recognition of James Watt's improvements to the steam engine. 'Old Bess' was built by Boulton and Watt in 1777 and used to power their Soho Manufactory until 1848. this engine was the precursor of much of the power-generating plant on show in the Museum and is the oldest surviving of Watt's engines.

Boulton and Watt Engine The world's oldest steam engine still able to perform its original function. Presented to mark the year of the 250th anniversary of the birth of James Watt (Engineer) 1736-1819.

In Buchanan's land on this site James Watt occupied a workshop in 1763.

William Street (junction with Dalrymple Street), Greenock, United Kingdom where they was born (1736)

Wattilisk sculpture by Vincent Woropay is presented. The sculpture is made of black Indian granite with an Egyptian obelisks and Native American totem poles which associate the surroundings and history of Birmingham, England. It has a surmounted portrait heads and is situated outside the Crown Courts. [full inscription unknown]

James Watt 1736-1819 Inventor of the Condensing Steam Engine Undertook his formative work in this building.

This lodge was the gatehouse to Heathfield Hall, home of James Watt (1736 - 1819) steam engineer, inventor and scientist.