Charles Lutwidge Dodgson (; 27 January 1832 – 14 January 1898), better known by his pen name Lewis Carroll, was an English writer of children's fiction, notably Alice's Adventures in Wonderland and its sequel Through the Looking-Glass. He was noted for his facility at word play, logic, and fantasy. The poems Jabberwocky and The Hunting of the Snark are classified in the genre of literary nonsense. He was also a mathematician, photographer, inventor and Anglican deacon. Carroll came from a family of high-church Anglicans, and developed a long relationship with Christ Church, Oxford, where he lived for most of his life as a scholar and teacher. Alice Liddell, daughter of the Dean of Christ Church, Henry Liddell, is widely identified as the original for Alice in Wonderland, though Carroll always denied this. Speculation about the nature of his relationships with children has foundered on lack of evidence. In 1982, a memorial stone to Carroll was unveiled in Poets' Corner, Westminster Abbey. 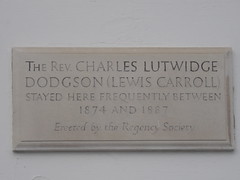 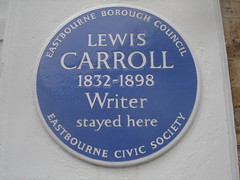 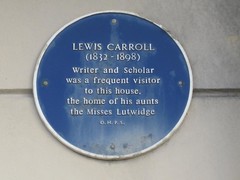 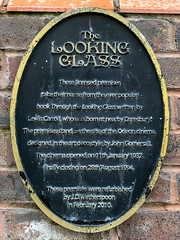 On this spot stood the parsonage in which Charles Lutwidge Dodgson (Lewis Carroll) was ...
Hatton, Warrington, United Kingdom 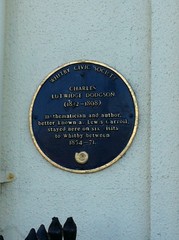 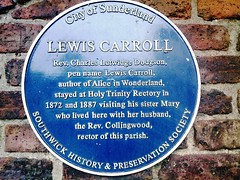 The Old Hall. This fine house of 1738, on the site of one of the medieval prebendal houses, served as Canon's Residence from 1841 to 1858. Between 1852 and 1858 Revd. Charles Dodgson (Lewis Carroll) stayed for some weeks of each year, and in 1855 wrote "Ye Carpette Knyghte", one of his humorous poems, and in 1858 "Legend of Scotland", a story for the Bishop's childresn.

Lewis Carroll (1832-1898) writer and scholar was a frequent visitor to this house, the home of his aunts the Misses Lutwidge

The Looking Glass These licensed premises take their name from the ever popular book Through the Looking Glass written by Lewis Carroll, who was born at nearby Daresbury. The premises stand on the site of the Odeon Cinema designed in the art deco style by John Gomersall. The cinema opened on 11th January 1937, finally closing on 28th August 1994. These premises were refurbished by J.D. Wetherspoon in February 2010.

41–43 Buttermarket Street, Warrington, United Kingdom where they was born near (1832)

On this spot stood the parsonage in which Charles Lutwidge Dodgson (Lewis Carroll) was born on the 27th January 1832. An island farm 'mid seas of corn, swayed by the wandering breath of morn, the happy spot where I was born.

Morphany Lane, Hatton, Warrington, United Kingdom where they was born (1832)

Lewis Carroll. Rev. Charles Lutwidge Dodgson pen name Lewis Carroll, author of Alice in Wonderland, satyed at Holy Trinity Rectory in 1872 and 1887 visiting his sister Mary who lived here with her husband the Rev. Collingwood, rector of this parish.

Great Channel affectionately known as "Cloaca Maxima" when Swale House was the residence of James Tate and of his son and namesake Masters of Richmond School 1796-1833 and 1834-1863 respectively. Scholars who boarded with them here included Lewis Carroll, the boy-poet Herbert Knowles and two sons of Earl Grey, Prime Minister 1833-1838

The Chestnuts, Castle Hill, Guildford, United Kingdom where they died (1898) and lived