Mary Baker (née Willcocks) (1791, Witheridge, Devonshire, England – 24 December 1864, Bristol, England) was a noted impostor. Posing as the fictional Princess Caraboo, Baker pretended to be from a far off island kingdom. Baker fooled a British town for some months. 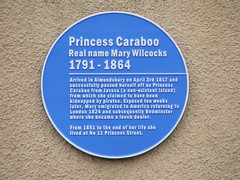 Princess Caraboo Real name Mary Wilcocks 1791-1864 Arrived in Almondsbury on April 3rd 1817 and successfully passed herself off as Princess Caraboo from Javasu (a non-existent island) from which she claimed to have been kidnapped by pirates. Exposed ten weeks later, Mary emigrated to America returning to London 1824 and subsequently Bedminster where she became a leech dealer. From 1851 to the end of her life she lived at No 11 Princess Street.