Sir Robert Eric Mortimer Wheeler CH, CIE, MC, TD, FSA, FRS, FBA (10 September 1890 – 22 July 1976) was a British archaeologist and officer in the British Army. Over the course of his career, he served as Director of both the National Museum of Wales and London Museum, Director-General of the Archaeological Survey of India, and the founder and Honorary Director of the Institute of Archaeology in London, further writing twenty-four books on archaeological subjects. Born in Glasgow to a middle-class family, Wheeler was raised largely in Yorkshire before relocating to London in his teenage years. After studying Classics at University College London (UCL), he began working professionally in archaeology, specializing in the Romano-British period. During World War I he volunteered for service in the Royal Artillery, being stationed on the Western Front, where he rose to the rank of major and was awarded the Military Cross. Returning to Britain, he obtained his doctorate from UCL before taking on a position at the National Museum of Wales, first as Keeper of Archaeology and then as Director, during which time he oversaw excavation at the Roman forts of Segontium, Y Gaer, and Isca Augusta with the aid of his first wife, Tessa Wheeler. Influenced by the archaeologist Augustus Pitt Rivers, Wheeler argued that excavation and the recording of stratigraphic context required an increasingly scientific and methodical approach, developing the "Wheeler Method". In 1926, he was appointed Keeper of the London Museum; there, he oversaw a reorganisation of the collection, successfully lobbied for increased funding, and began lecturing at UCL. In 1934, he established the Institute of Archaeology as part of the federal University of London, adopting the position of Honorary Director. In this period, he oversaw excavations of the Roman sites at Lydney Park and Verulamium and the Iron Age hill fort of Maidan Castle. During World War II, he re-joined the Armed Forces and rose to the rank of brigadier, serving in the North African Campaign and then the Allied invasion of Italy. In 1944 he was appointed Director-General of the Archaeological Survey of India, through which he oversaw excavations of sites at Harappa, Arikamedu, and Brahmagiri, and implemented reforms to the subcontinent's archaeological establishment. Returning to Britain in 1948, he divided his time between lecturing for the Institute of Archaeology and acting as archaeological adviser to Pakistan's government. In later life, his popular books, cruise ship lectures, and appearances on radio and television, particularly the BBC series Animal, Vegetable, Mineral?, helped to bring archaeology to a mass audience. Appointed Honorary Secretary of the British Academy, he raised large sums of money for archaeological projects, and was appointed British representative for several UNESCO projects. Wheeler is recognised as one of the most important British archaeologists of the twentieth century, responsible for successfully encouraging British public interest in the discipline and advancing methodologies of excavation and recording. Further, he is widely acclaimed as a major figure in the establishment of South Asian archaeology. However, many of his specific interpretations of archaeological sites have been discredited or reinterpreted, and he was often criticised for bullying colleagues and sexually harassing young women. 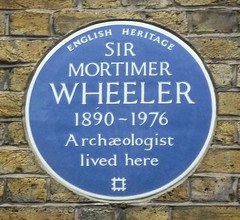