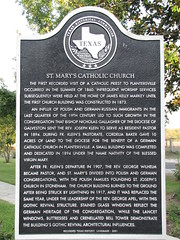 Saint Mary's Seminary. When the Rev. Nicholas Gallagher became third bishop of Galveston in 1882, most Roman Catholic priests in the Diocese were natives of other states or countries. Realizing the need for a diocesan seminary to train young Texans for the priesthood, Bishop Gallagher founded St. Mary's Seminary School for Boys. The school opened in the fall of 1901 with 30 grammar school-age boys and 6 seminarians. St. Mary's Seminary was located at this site in La Porte's Sylvan Beach Hotel, once a majestic resort center, which had been heavily damaged in the 1900 hurricane. Over the years, increased enrollment necessitated the construction of additional facilities. Under the leadership of the Rev. James Kirwin, who served as president from 1911 until his death in 1926, St. Mary's became nationally known for its academic excellence. In 1926, the seminary was awarded university status, with the right to confer academic degrees. Many of its alumni, including more than 6 we became bishops, have served as prominent church leaders. In 1954, the school relocated to Houston and eventually merged with St. Thomas University in that city. The chapel continues to serve the members of St. Mary's parish in La Porte. Texas Sesquicentennial 1836 - 1986 #10760

St. Mary's Catholic Church. St. Mary's Catholic Church The first recorded visit of a Catholic priest to Plantersville occurred in the summer of 1860. Infrequent worship services subsequently were held at the home of James Kelly Markey until the first church building was constructed in 1873. An influx of Polish and German-Russian immigrants in the last quarter of the 19th century led to such growth in the congregation that Bishop Nicholas Gallagher of the Diocese of Galveston sent the Rev. Joseph Klein to serve as resident pastor in 1894. During Fr. Klein's pastorate, Cordelia Baker gave 10 acres of land to the diocese for the benefit of a German Catholic Church in Plantersville. A small building was completed and dedicated in 1894 under the name Nativity of the Blessed Virgin Mary. After Fr. Klein's departure in 1907, the Rev. George Wilhelm became pastor, and St. Mary's divided into Polish and German congregations, with the Polish families founding St. Joseph's Church in Stoneham. The church building burned to the ground after being struck by lightning in 1917, and it was replaced the same year, under the leadership of the Rev. George Apel, with this Gothic Revival structure. Stained glass windows reflect the German heritage of the congregation, while the lancet windows, buttresses and crenellated bell tower demonstrate the building's Gothic Revival architectural influences. Recorded Texas Historic Landmark - 2001 #12792