Arthur Henderson (13 September 1863 – 20 October 1935) was a British iron moulder and Labour politician. He was the first Labour cabinet minister, won the Nobel Peace Prize in 1934 and, uniquely, served three separate terms as Leader of the Labour Party in three different decades. He was popular among his colleagues, who called him "Uncle Arthur" in acknowledgement of his integrity, his devotion to the cause and his imperturbability. He was a transitional figure whose policies were, at first, close to those of the Liberal Party. The trades unions rejected his emphasis on arbitration and conciliation, and thwarted his goal of unifying the Labour Party and the trade unions. 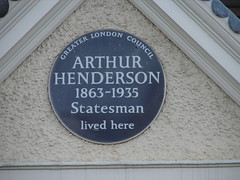