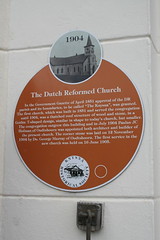 1851/1904. The Dutch Reformed Church. In the Government Gazette of April 1851 approval of the DR parish and its boundaries, to be called “the Knysna”, was granted. The first church, which was built in 1851 and served the congregation until 1904, was a thatched roof structure of wood and stone, in a Gothic T-shaped design, similar in shape to today’s church, but smaller. The congregation outgrew this building and, in July 1904, Paulus J. C. Hofman of Oudtshoorn was appointed both architect and builder of the present church, which stands on the same site as the first church. The corner stone was laid on 12 November 1904 by Ds. George Murray of Oudtshoorn. The first service in the new church was held on 16 June 1905.