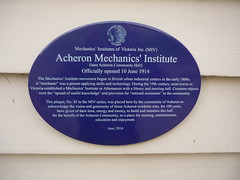 Acheron Mechanics' Institute (later Acheron Community Hall) Officially opened 10 June 1914. The Mechanics' Institute movement began in British urban industrial centres in the early 1800s. A "mechanic" was a person applying skills and technology. During the 19th century, most towns in Victoria established a Mechanics' Institute or Athenaeum with a library and meeting hall. Common objects were the "spread of useful knowledge" and provision for "rational recreation" in the community. This plaque, No. 42 in the MIV series, was placed here by the community of Acheron to acknowledge the vision and generosity of those Acheron residents who, for 100 years, have given of their time, energy and money, to build and maintain this hall for the benefit of the Acheron Community, as a place for meeting, entertainment, education and enjoyment. June 2014