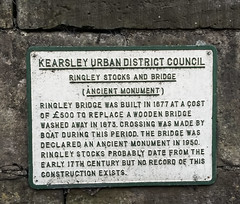 Ringley Stocks and Bridge (Ancient Monument) Ringley Bridge was built in 1677 at a cost of £500 to replace a wooden bridge washed away in 1673. Crossing was made by boat during this period. The bridge was declared an Ancient Monument in 1950. Ringley Stocks probably date from the early 17th century but no record of this construction exists

Fold Road, Kearsley, United Kingdom where it was