Richard "Dick" Turpin (bapt. 1705 – 7 April 1739) was an English highwayman whose exploits were romanticised following his execution in York for horse theft. Turpin may have followed his father's trade as a butcher early in life, but, by the early 1730s, he had joined a gang of deer thieves and, later, became a poacher, burglar, horse thief and killer. He is also known for a fictional 200-mile (320 km) overnight ride from London to York on his horse Black Bess, a story that was made famous by the Victorian novelist William Harrison Ainsworth almost 100 years after Turpin's death. Turpin's involvement in the crime for which he is most closely associated—highway robbery—followed the arrest of the other members of his gang in 1735. He then disappeared from public view towards the end of that year, only to resurface in 1737 with two new accomplices, one of whom he may have accidentally shot and killed. Turpin fled from the scene and shortly afterwards killed a man who attempted his capture. Later that year, he moved to Yorkshire and assumed the alias of John Palmer. While he was staying at an inn, local magistrates became suspicious of "Palmer" and made enquiries as to how he funded his lifestyle. Suspected of being a horse thief, "Palmer" was imprisoned in York Castle, to be tried at the next assizes. Turpin's true identity was revealed by a letter he wrote to his brother-in-law from his prison cell, which fell into the hands of the authorities. On 22 March 1739, Turpin was found guilty on two charges of horse theft and sentenced to death; he was executed on 7 April 1739. Turpin became the subject of legend after his execution, romanticised as dashing and heroic in English ballads and popular theatre of the 18th and 19th centuries and in film and television of the 20th century. 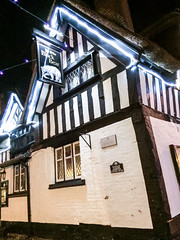 Ye Olde Black Beare Inn Built in 1634 AD it is the last remaining thatched building in the town. Bear-baiting certainly took place here in the days gone by and it is said that Dick Turpin stayed here on more than one occasion

High Street, Sandbach, United Kingdom where they was