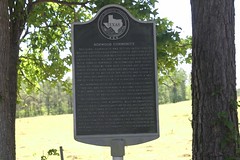 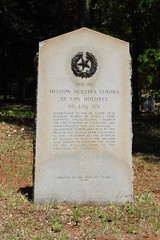 Washington County. To the memory of those courageous souls, the delegates to the Consti...
Washington-on-the-Brazos, TX, United States

Norwood Community. This rural community was settled in the 1840s by William Coleson (W. C.) Norwood (1794-1885) and Eliza LeGrand Norwood (1808-1869). They migrated from North Carolina, where W. C. was a merchant and postmaster in the town of Norwood. The Norwoods were accompanied to Texas by their nine children and extended family members. Eliza Norwood's brother, E. O. LeGrand, a veteran of the Battle of San Jacinto and signer of the Texas Declaration of Independence, became a member of their household in the Norwood community. W. C. Norwood served as San Augustine County commissioner and was instrumental in building early county roads. James L. Norwood, son of W. C. and Eliza Norwood, also served as San Augustine County commissioner. The Norwood community included a cotton gin, grist mill, syrup mill, and a sawmill built by Hampton L. Norwood. E. O. Norwood, another of W. C. and Eliza's sons, became the town's doctor. In 1892 a school was established on one acre of land deeded by James Norwood. His daughter Cora donated land for a church in 1926. The community also included a grocery store, houses, and a cemetery. Norwood family members remain in the area, and continue to own land that once belonged to their ancestors. (1997) #7629

San Augustine. An early eastern gate to Texas, in area claimed in 1600s by both France and Spain. To back her claim, Spain in 1691 chartered from Mexico past this site El Camino Real (The King's Highway) and established nearby in 1717 Mission Dolores de los Aies. Inhabited by Ayish Indians and Spaniards until the late 1790s, when Richard Sims came and was soon followed by John Quinalty, Edmond Quirk and families of Broocks, Cullens, Cartwrights, Hortons, Hustons, Prathers and others. By 1824 the settlement had a water mill to grind corn meal; in 1826, a cotton gin. In the 1827 Battle of Ayish Bayou, Col. Prather and 69 men put down Fredonian uprising over land titles. The town was laid off in 1833 by Thomas McFarland. In 1836 it sent as delegates to sign Declaration of Independence S. W. Blount and E. O. LeGrand; fielded 3 companies to fight in the war for independence. Its Republic of Texas statesmen included vice-president K. L. Anderson; J. A. Greer, Secretary of the Treasury; Wm. Holman, congressman; J. Pinckney Henderson, minister to England and France, and later the first governor of the state. Oran M. Roberts was 16th governor. Home of the 1965 United States Ambassador to Australia Edward Clark. Many historic sites are marked. (1966) #7637

?, Washington-on-the-Brazos, TX, United States where they was

Macune Cemetery. By the time Texas became a republic in 1836, Nathaniel Hunt had settled in this area with his wife, Mary Elizabeth (White), and their children, including their oldest daughter Clarissa and her husband, John M. Neely. The Hunt and Neely families were active in the early settlement; Nathaniel Hunt served in a variety of public offices, including justice of the peace. His home also served as a mail stop on the San Augustine to Houston route. This burial ground began as the Hunt Cemetery. John Neely (d. 1845) was the first buried here, followed by his father-in-law four years later. As the community grew, other family members and neighbors were buried in the cemetery. The community's first post office opened in 1888. Area farmers active in the Southern Farmers' Alliance suggested it be named for leader Charles Macune. In 1926, John S. Henry donated adjacent land to the community to enlarge the Hunt Cemetery. Today, the burial ground continues to be used by area residents and descendants of settlers buried here. Graves include those of Edward Oswald LeGrand, signer of the Texas Declaration of Independence, and veterans of military conflicts dating to the War of 1812. Historic Texas Cemetery - 2004 #13239

CR 316, San Augustine, TX, United States where they was buried