Tavistock Abbey, also known as the Abbey of Saint Mary and Saint Rumon, is a ruined Benedictine abbey in Tavistock, Devon. Nothing remains of the abbey except the refectory, two gateways and a porch. The abbey church, dedicated to Our Lady and St Rumon, was destroyed by Danish raiders in 997 and rebuilt under Lyfing, the second abbot. The church was further rebuilt in 1285 and the greater part of the abbey between 1457 and 1458. 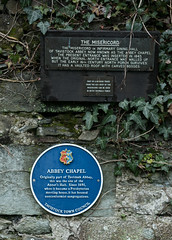 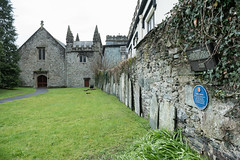 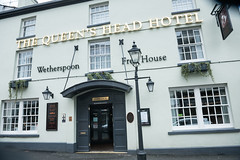 Abbey Chapel Origianally part of Tavistock Abbey, this was the site of the Abbot's Hall. Since 1691, when it became a Presbyterian meeting house, it has housed nonconformist congregations

The Misericord or Infirmary Dining Hall of Tavistock Abbey, now known as the Abbey Chapel. The present entrance was inserted in 1845, when the original north entrance was walled up. But the early 16th century north porch survives. It has a vaulted roof weith carved bosses

The Queen's Head Hotel This three storey, grade II listed building is a long-standing feature of one of Tavistock's oldest streets. The building was refurbished in the late 1990's to become Brown's Hotel. During the refurbishment, a holy well was uncovered that provided fresh water for Tavistock Abbey. Brown's Hotel was previously the Queen's Head, an old coaching inn with extensive stabling and yards at the rear. In the 18th century, the Queen's Head was one of Tavistock's many hostelries and is said to have stood on the site of an even earlier inn. These premises were refurbished by JD Wetherspoon and opened in July 2015