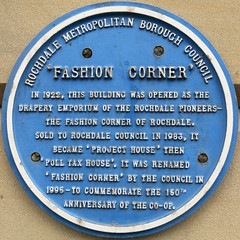 'Fashion Corner' In 1922, this building was opened as the drapery emporium of the Rochdale Pioneers - the fashion corner of Rochdale. Sold to Rochdale Council in 1983, it became 'Project House' then 'Poll Tax House'. it was renamed 'Fashion Corner' by the council in 1995 - to commemorate the 150th anniversary of the Co-Op.

Drake Street, Rochdale, United Kingdom where it sited and sited