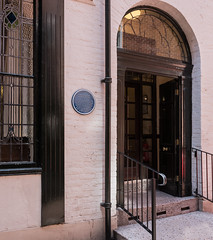 The Roebuck Public House c. 1814 the first 'Roebuck PH' was built in 1660 on the old Market Place and moved in 1783 to the 'New Wall' (now No 5 South Parade). During that time it was a key stop for horse-drawn coach and mail services throughout the north of England. The Earl of Uxbridge stopped here in 1817 to replace his cork leg after the Battle of Waterloo