Denny Lane (4 December 1818–29 November 1895) was an Irish businessman and nationalist public figure in Cork city, and in his youth a Young Irelander. Although a Catholic, he graduated from the mainly Protestant Trinity College, Dublin, where he joined the College Historical Society, became a friend of Charles Gavan Duffy and Thomas Davis, and moved in the circle from which the Young Ireland movement sprang. He was called to the bar from Inner Temple. Under the pen name "Domhnall na Glanna" or "Domhnall Gleannach", he wrote Irish nationalist and romantic lyrics which were published in The Nation in the 1840s, the best known being "Carraigdhoun" (or "Lament of the Irish Maiden") and "Kate of Araglen". Lane and his college classmate Michael Joseph Barry were the most prominent Young Irelanders in Cork, and were interned in Cork City Gaol after the Young Irelander Rebellion of 1848. Thomas Carlyle on his 1849 Irish tour met Lane on 17 July, describing him as a "fine brown Irish figure, Denny; distiller – ex-repealer; frank, hearty, honest air; like Alfred Tennyson a little". Lane took over his father's distillery in Cork and later started several industrial businesses near the city, with mixed success. He took an interest in technology and industrial innovation. He was on the boards of the Macroom Railway Company and the Blackrock and Passage Railway Company, and also involved in Cork's School of Art, School of Music, and Literary & Scientific and Historical & Archaeological societies. He stood for Parliament in the 1876 Cork City by-election, but the Home Rule vote was split with John Daly, so that unionist William Goulding was elected. 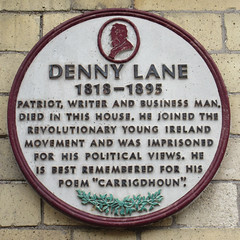 Denny Lane, 1818-1895, patriot, writer and business man, died in this house. He joined the revolutionary Young Ireland movement and was imprisoned for his political views. He is best remembered for his poem "Carrigdhoun".

72 South Mall, Cork, Ireland where they was