Clemente Rebora (6 January 1885 – 1 November 1957) was a poet from Milan, Italy. From 1913 to 1922, he wrote anonymous "Songs" and lyrics. Previously an atheist, he had a spiritual crisis in 1928 and became a devout Catholic. In 1930, he entered a seminary; in 1936, he became a Rosminian priest. After this, his work became religious in orientation, but his work is popular beyond Catholic circles for its treatment of metaphysics and physics. He is somewhat controversial for his friendship with Julius Evola, but the friendship seems to have been largely based on his hope Julius would convert to Christianity. When this hope grew dim the friendship declined. 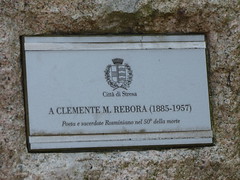 Piazza Guglielmo Marconi, Stresa, Italy where they was