Knight Commander of the Order of the Indian Empire, Fellow of the Royal Institute of British Architects, Royal Academician, architect, Knight Bachelor (from 1918), and Order of Merit recipient (from 1942)

Sir Edwin Landseer Lutyens (; LUT-yənz; 29 March 1869 – 1 January 1944) was an English architect known for imaginatively adapting traditional architectural styles to the requirements of his era. He designed many English country houses, war memorials and public buildings. In his biography, the writer Christopher Hussey wrote, "In his lifetime (Lutyens) was widely held to be our greatest architect since Wren if not, as many maintained, his superior". The architectural historian Gavin Stamp described him as "surely the greatest British architect of the twentieth (or of any other) century". Lutyens played an instrumental role in designing and building New Delhi, which would later on serve as the seat of the Government of India. In recognition of his contribution, New Delhi is also known as "Lutyens' Delhi". In collaboration with Sir Herbert Baker, he was also the main architect of several monuments in New Delhi such as the India Gate; he also designed Viceroy's House, which is now known as the Rashtrapati Bhavan. 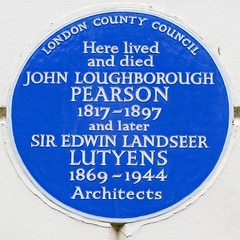 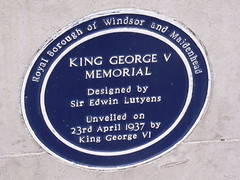 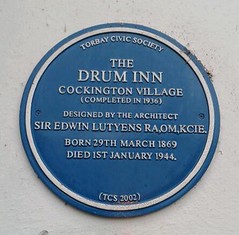 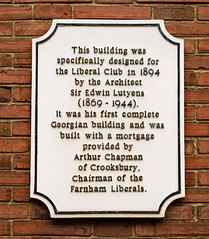 This building was specifically designed for the Liberal Club in 1894 by the Architect Sir Edwin Lutyens (1869-1944). It was his first complete Georgian building and was built with a mortgage provided by Arthur Chapman of Crooksbury, Chairman of the Farnham Liberals.