The River Exe (/ˈɛks/ EKS) in England rises at Exe Head, near the village of Simonsbath, on Exmoor in Somerset, 8.4 kilometres (5 mi) from the Bristol Channel coast, but flows more or less directly due south, so that most of its length lies in Devon. It flows for 60 miles (96 km) and reaches the sea at a substantial ria, the Exe Estuary, on the south (English Channel) coast of Devon. Historically, its lowest bridging point was at Exeter, though there is now a viaduct for the M5 motorway about 3 kilometres (2 mi) south of the city centre. 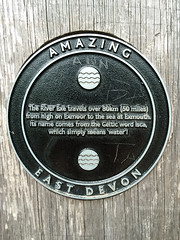 The River Exe travels over 80km (50 miles) from high on exmoor to the sea at Exmouth. Its name comes from the Celtic word Isca, which simply means 'water'!