Orcombe Point is a coastal feature near Exmouth, Devon, on the south coast of England. It lies about 16 km (9.9 mi) south of the city of Exeter, 3 km (1.9 mi) southeast of Exmouth town centre and about 12 km (7.5 mi) southwest of Sidmouth. Directly to the west lies Exmouth Beach and to the east is Sandy Bay, a holiday beach, that can be reached either along the coastal path or through the large caravan park. The two beaches are part of a long strip of sand and are connected to each other below Orcombe Point at low tide. Sited high upon the hill, which affords spectacular views, Orcombe Point is marked by the "Geoneedle", which was unveiled by His Royal Highness the Prince of Wales, in 2002, at the inauguration. The artist whose conceived and designed the "Geoneedle" sculpture was Michael Fairfax. He also conceived and designed the "Exeter Riddle" in Exeter. The Geoneedle is constructed from a variety of different stones, representing both the major building stones to be found on the Jurassic Coast and the sequence of rocks that form this part of the coastline. 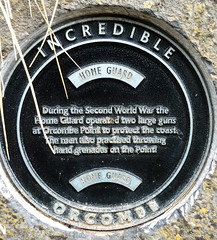 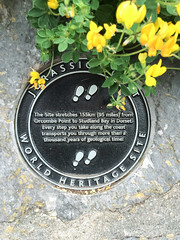 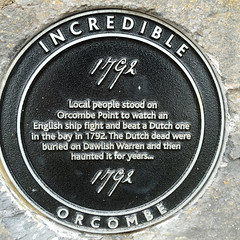 During the Second World War the Home Guard operated two large guns at Orcombe Point to protect the coast. The men also practised throwing hand granades on the Point !

The site stretches 155km (95 miles) from Orcombe Point to Studland Bay in Dorset. Every step you take along the coast transports you through more than a thousand years of geological time !

Local people stood on Orcombe Point to watch an English ship fight and beat a Dutch one in the bay in 1792. The Dutch dead were buried on Dawlish Warren and then haunted it for years.... 1792