Peter Edward Cook (17 November 1937 – 9 January 1995) was an English actor, comedian, satirist, playwright and screenwriter. He was the leading figure of the British satire boom of the 1960s, and he was associated with the anti-establishment comedic movement that emerged in the United Kingdom in the late 1950s. Born in Torquay, he was educated at the University of Cambridge. There he became involved with the Footlights Club, of which he later became president. After graduating he created the comedy stage revue Beyond the Fringe, beginning a long-running partnership with Dudley Moore. In 1961, Cook opened the comedy club The Establishment in Soho, Central London. In 1965, Cook and Moore began a television career, beginning with Not Only... But Also. Cook’s deadpan monologues contrasted with Moore’s buffoonery. They received the 1966 British Academy Television Award for Best Entertainment Performance. Following the success of the show, the duo appeared together in the films The Wrong Box (1966) and Bedazzled (1967). Cook and Moore returned to television projects continuing to the late 1970s, including co-presenting Saturday Night Live in the United States. From 1978 until his death in 1995, Cook no longer collaborated with Moore, apart from a few cameo appearances but continued to be a regular performer in British television and film. Referred to as "the father of modern satire" by The Guardian in 2005, Cook was ranked number one in the Comedians' Comedian, a poll of more than 300 comics, comedy writers, producers and directors in the English-speaking world. 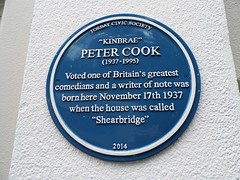 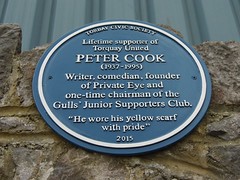 Middle Warberry Road, Torquay, United Kingdom where they was born (1937)

Launa Windows Stadium's Popular Side, Marnham Road, Torquay, United Kingdom where they was