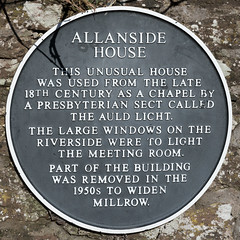 Allanside House This unusual house was used from the late 18th century as a chapel by a Presbyterian sect called the Auld Licht. The large windows on the riverside were to light the meeting room. Part of the building was removed in the 1950's to widen Millrow

Millrow, Dunblane, United Kingdom where it was