place and railway station (from 1838)

Rugby railway station serves the town of Rugby in Warwickshire, England. It opened during the Victorian era, in 1885, replacing earlier stations situated a little further west. Since the closure of the former Rugby Central station on the now-abandoned Great Central Railway route through the town, it is Rugby's only station. Between 1950 and 1970 the station was known as Rugby Midland before reverting to its original title. The station underwent an during 2006–2008, with new platforms added, and a new ticket office and entrance building constructed, however the original Victorian part of the station was retained in the upgrade. Rugby station is at the centre of two important junctions of the West Coast Main Line (WCML) connecting London to Birmingham and North West England and Scotland. The junction of the Trent Valley Line to the North West, and the Rugby-Birmingham-Stafford Line to Birmingham is a short distance west of the station. East of the station, the Northampton Loop Line diverges at a junction from the direct line to London. Until the 1960s it also had routes to Leicester, Peterborough East and Leamington Spa (Avenue) but these have all since been closed. The present station, managed by Avanti West Coast, is located roughly half a mile north of Rugby town centre. On the WCML as a whole, it is located 82 miles (132 km) north of London Euston, and 319 miles (513 km) south of Glasgow Central. 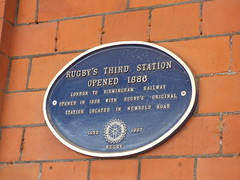