Delia Ann Derbyshire (5 May 1937 – 3 July 2001) was an English musician and composer of electronic music and musique concrète. She is best known for her electronic realisation of Ron Grainer's theme music to the British science fiction television series Doctor Who and for her pioneering work with the BBC Radiophonic Workshop. 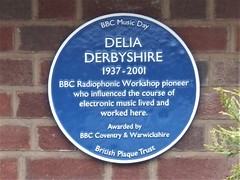 Sculptress of Sound: Delia Ann Derbyshire Born Coventry in 1937. An English composer, Delia is best known for realising the Doctor Who theme music during her time at the BBC Radiophonic Workshop. She later said that the sound of falling bombs and air raid sirens she heard as a child in the Coventry Blitz of 1940 influenced her approach to electronic music and several of her haunting compositions. Delia died in 2001. She was awarded an Honorary Doctorate of Arts from Coventry University in 2017.

Jordan Well, Coventry, United Kingdom where they was