(For other uses, see Cricket (disambiguation).) The Crickets were an American rock-and-roll band from Lubbock, Texas, formed by the singer-songwriter Buddy Holly in the 1950s. Their first hit record, "That'll Be the Day", released in 1957, was a number-one hit single on the Billboard Hot 100 chart on September 23. The sleeve of their first album, The "Chirping" Crickets, shows the band lineup at the time: Holly on vocals and lead guitar, Niki Sullivan on backing vocals and rhythm guitar, Jerry Allison on drums, and Joe Mauldin on double bass. The Crickets helped set the template for subsequent rock bands, such as the Beatles, with their guitar-bass-drums lineup and the talent to write most of their own material. After Holly's death in 1959 the band continued to tour and record with different lead vocalists and other band members. They continued performing and releasing new material into the 21st century. 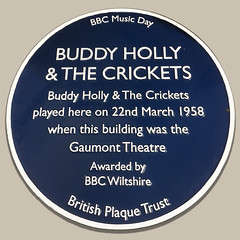