The Fabian Society is a British socialist organisation whose purpose is to advance the principles of democratic socialism via gradualist and reformist effort in democracies, rather than by revolutionary overthrow. The Fabian Society was also historically related to radicalism, a left-wing liberal tradition. As one of the founding organisations of the Labour Representation Committee in 1900, and as an important influence upon the Labour Party which grew from it, the Fabian Society has had a powerful influence on British politics. Other members of the Fabian Society have included political leaders from other countries, such as Jawaharlal Nehru, who adopted Fabian principles as part of their own political ideologies. The Fabian Society founded the London School of Economics in 1895. Today, the society functions primarily as a think tank and is one of 20 socialist societies affiliated with the Labour Party. Similar societies exist in Australia (the Australian Fabian Society), in Canada (the Douglas–Coldwell Foundation and the now-disbanded League for Social Reconstruction), in Sicily (Sicilian Fabian Society) and in New Zealand (The NZ Fabian Society). 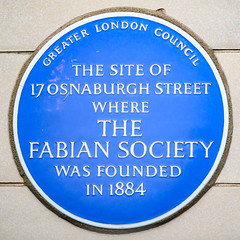