Charles de Sousy Ricketts RA (2 October 1866 – 7 October 1931) was a British artist, illustrator, author and printer, known for his work as a book designer and typographer and for his costume and scenery designs for plays and operas. Ricketts was born in Geneva to an English father and a French mother and brought up mainly in France. In 1882 he began studying wood engraving in London, where he met a fellow student, Charles Shannon, who became his lifelong companion and artistic collaborator. Ricketts first made his mark in book production, first as an illustrator, and then as the founder and driving force of the Vale Press (1896–1904), one of the leading private presses of the day, for which he designed the type and illustrations. A disastrous fire at the printers led to the closure of the press, and Ricketts turned increasingly to painting and sculpture over the following two decades. In 1906 he also began a career as a theatre designer, first for works by his friend Oscar Wilde and later for plays by writers including Aeschylus, Hugo von Hofmannsthal, William Shakespeare, Bernard Shaw, and W. B. Yeats. His most enduring theatre designs, which remained in use for more than 50 years, were for Gilbert and Sullivan's The Mikado. With Shannon, Ricketts built up a substantial collection of paintings, drawings and sculpture. He established a reputation as an art connoisseur, and in 1915 turned down the offer of the directorship of the National Gallery. He later regretted that decision, but served as adviser to the National Gallery of Canada from 1924 until his death. He wrote three books of art criticism, two volumes of short stories and a memoir of Wilde. Selections from his letters and diaries were posthumously published. 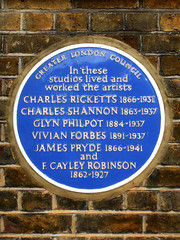