Paul Reynaud (French: [pɔl ʁɛno]; 15 October 1878 – 21 September 1966) was a French politician and lawyer prominent in the interwar period, noted for his stances on economic liberalism and militant opposition to Germany. Reynaud opposed the Munich agreements of September 1938, when France and the United Kingdom gave way before Hitler's proposals for the dismemberment of Czechoslovakia. After the outbreak of World War II Reynaud became the penultimate Prime Minister of the Third Republic in March 1940. He was also vice-president of the Democratic Republican Alliance center-right party. Reynaud was Prime Minister during the German defeat of France in May and June 1940; he persistently refused to support an armistice with Germany, as premier in June 1940, he unsuccessfully attempted to save France from German occupation in World War II, and resigned on 16 June. After unsuccessfully attempting to flee France, he was arrested by Philippe Petain's administration. Surrendering to German custody in 1942, he was imprisoned in Germany and later Austria until liberation in 1945, where he was released after the Battle of Itter Castle in which one of the leaders, German Major Josef Gangl, declared a hero by the Austrian resistance, gave his life, taking a sniper's bullet to save Reynaud. Elected to the Chamber of Deputies in 1946, he became a prominent figure again in French political life, serving in several cabinet positions. He favoured a United States of Europe, and participated in drafting the constitution for the Fifth Republic, but resigned from government in 1962 after disagreement with President de Gaulle over changes to the electoral system. 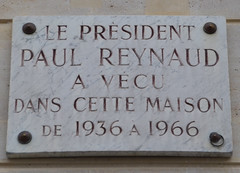 English translation: The Prèsident Paul Reynaud lived in this house 1936-1966