Rotten Row is a broad track running 1,384 metres (4,541 ft) along the south side of Hyde Park in London. It leads from Hyde Park Corner to Serpentine Road. During the 18th and 19th centuries, Rotten Row was a fashionable place for upper-class Londoners to be seen horse riding. Today it is maintained as a place to ride horses in the centre of London, but it is little used as such. 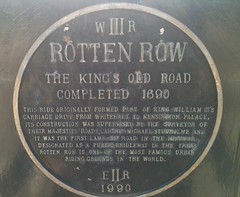 WR III Rotten Row The King's Old Road completed 1690. This ride originally formed part of King William III's carriage drive from Whitehall to Kensington Palace. Its construction was supervised by the surveyor of their Majesties roads Captain Michael Studholme and it was the first lamp-lit road in the Kingdom. Designated as a public bridleway in the 1730's, Rotten Row is one of the most famous urban riding grounds in the world. ER II 1990