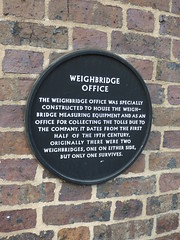 Weighbridge Office The Weighbridge Office was specially constructed to house the weighbridge measuring equipment and as an office for collecting the tolls due to the company. It dates from the first half of the 19th century. Originally there were two weighbridges, one on either side, byt only one survives.