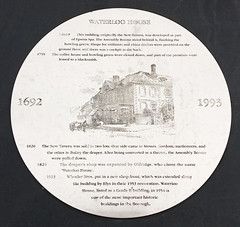 Waterloo House 1692-9 This building, originally the New Tavern, was developed as part of Epsom Spa. The Assembly Rooms stood behind it, flanking the bowling green. Shops for milliners and china dealers were provided on the ground floor, and there was a cockpit at the back. 1755 the office coffee house and bowling green were closed down, and part of the premises were leased to a blacksmith. 1820 The New Tavern was sold into lots. One side came to Messrs. Gardom, auctioneers, and the other to Bailey the draper. After being converted as a theatre, the Assembly Rooms work pulled down. 1820 The draper’s shop was expanded by Oldridge, who chose the name ‘Waterloo House’. 1913 Wheeler Bros. put in a new shop front, which extended along the building by Elys in their 1953 restoration. Waterloo House, listed as a Grade II* building, in 1954 is one of the most important historic buildings in the Borough.