woman, founder of the first UK school of occupational therapy, Doctor - Bachelor of Medicine MBBS (from 1919), and Doctor of Medicine (from 1926)

Elizabeth Casson (14 April 1881 – 17 December 1954) was a British doctor and an occupational therapy pioneer. Initially training as a secretary, Casson began studying medicine at the University of Bristol when she was 32. She received her medical degree in 1926, becoming the first woman to receive one from the University of Bristol. She also attained the Gaskell prize from the Royal Medico-Psychological Association and a diploma in psychological medicine from the University of London. Casson set up a residential clinic for women with mental disorders at Dorset House in Bristol in 1929 with enough residential space for 800 patients, and she opened the first school of occupational therapy in the UK in the same building the following year. She took an active role in the therapeutic activities at Dorset House, even playing a part in the patient's production of Pride and Prejudice. Casson moved control of the school to a non-profit company in 1948, remaining as vice-chairman and medical director. She created the Elizabeth Casson Trust in 1949, intended to improve occupation therapy education and treatment. In 1951, Casson was awarded an OBE for her work at Dorset House and was also made an honorary fellow of the World Federation of Occupational Therapists. A memorial lecture was set up in her name in 1973 with presenters being selected by their peers, and a psychiatric unit was named after her at Bristol's Callington Road Hospital. 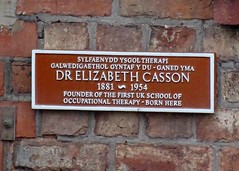 Ruthin Road, Denbigh, United Kingdom where they was born (1881)