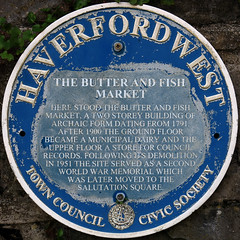 The Butter And Fish Market. Here stood The Butter And Fish Market, a two storey building of archaic form dating from 1791. After 1900 the ground floor became a municipal dairy and the upper floor a store for council records. Following its demolition in 1951 the site served as a Second World War memorial which was later moved to The Salutation Square.