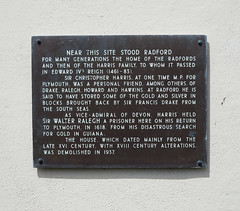 Near this site stood Radford, for many generations the home of the Radfords and then of the Harris family, to whom it passed in Edward IV’s reign (1461-83) Sir Christopher Harris, at one time MP for Plymouth, was a personal friend, among others, of Drake, Raleigh, Howard and Hawkins. At Radford he is said to have stored some of the gold and silver in blocks brought back by Sir Francis Drake from the South Seas. As Vice-Admiral of Devon, Harris held Sir Walter Raleigh a prisoner here on his return to Plymouth, in 1618, from his disastrous search for gold in Guiana. The House, which dated mainly from the late XVI century, with XVIII century alterations, was demolished in 1937.

, Plymouth, United Kingdom where it sited