Buck Ruxton (born Bukhtyar Chompa Rustomji Ratanji Hakim; 21 March 1899 – 12 May 1936) was an Indian-born British physician convicted and subsequently hanged for the September 1935 murders of his common-law wife, Isabella Ruxton (née Kerr), and the family housemaid, Mary Jane Rogerson, at his home in Lancaster, England. These murders are informally known as the Bodies Under the Bridge and the Jigsaw Murders, while Ruxton himself became known as The Savage Surgeon. The case became known as the "Bodies Under the Bridge" due to the location, near the Dumfriesshire town of Moffat in the Southern Uplands of Scotland, where the bodies were found. The case was also called the "Jigsaw Murders" because of the painstaking efforts to re-assemble and identify the victims and then determine the place of their murder. Ruxton earned the title of "The Savage Surgeon" due to his occupation and the extensive mutilation he inflicted upon his victims' bodies. The prosecution of Ruxton's murders would prove to be one of the United Kingdom's most publicised legal cases of the 1930s. The case itself is primarily remembered for the innovative forensic techniques employed to identify the victims and prove that their murders had been committed within the Ruxton household. 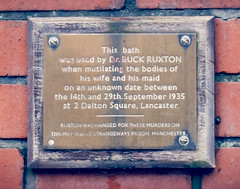 This bath was used by Dr. Buck Ruxton when mutilating the bodies of his wife and his maid on an unknown date between the 14th and 29th September 1935 at 2 Dalton Square, Lancaster. Ruxton was hanged for these murders in 12th May 1936 at Strangeways Prison, Manchester.

Lindle Lane, Hutton, United Kingdom where they was