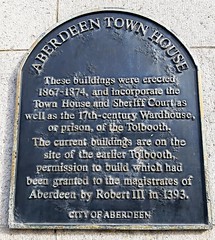 Aberdeen Town House. These buildings were erected 1867-1874, and incorporate the Town House and Sherriff Court as well as the 17th-century Wardhouse, or prison, of the Tolbooth. The current buildings are on the site of the earlier Tolbooth, permission to build which had been granted to the magistrates of Aberdeen by Robert III in 1393.