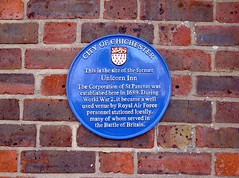 The Quaffer on Flickr All Rights Reserved
Chichester, United Kingdom

This s the site of the former Unicorn Inn. The Corporation of St Pancras was established here in 1689. During World War 2, it became a well used venue by Royal Air Force personnel stationed locally, many of whom served in the Battle of Britain.

, Chichester, United Kingdom where it sited