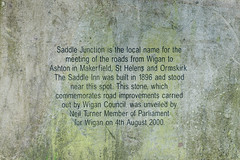 Saddle Junction is the local name for the meeting of the roads from Wigan to Ashton in Makerfield, St Helens and Ormskirk The saddle Inn was built in 1896 and stood near this spot. This stone, which commemorates road improvements carried out by Wigan Council, was unveiled by Neil Turner Member of Parliament for Wigan on 4th August 2000.

Warrington Road, Wigan, United Kingdom where they was