George Claridge Druce, MA, LLD, JP, FRS, FLS (23 May 1850 – 29 February 1932) was an English botanist and a Mayor of Oxford. G. Claridge Druce was born at Potterspury on Watling Street in Northamptonshire. He was the illegitimate son of Jane Druce, born 1815 in Buckinghamshire. He went to school in the village of Yardley Gobion. At 16, he was apprenticed to P. Jeyes & Co., a pharmaceutical firm in Northampton. In 1872, he passed exams to become a pharmacist. His main interest was botany. In 1876, he was involved in the foundation of the Northampton Natural History Society. In June 1879, Druce moved to Oxford and set up his own chemist's shop, Druce & Co., at 118 High Street, which continued until his death. He was one of the first in Oxford to have a telephone. He also featured as a shopkeeper in the Oxford novel Zuleika Dobson by Max Beerbohm. In 1880, Druce helped to found the Ashmolean Natural History Society of Oxfordshire, originally established as the Ashmolean Society in 1828. It was merged with the Oxfordshire Natural History Society by Druce in 1901. In 1886 he published The Flora of Oxfordshire, in 1887 The Flora of Berkshire, in 1926 The Flora of Buckinghamshire and in 1929 The Flora of West Ross. He was one of very few people to write a flora for more than one county. In 1889, he was awarded the degree of honorary MA by the University of Oxford and in 1895 he was appointed Fielding Curator in the Department of Botany at the University. Among his discoveries, Druce was the first to recognise (1907–11) as a distinct variety of Field Elm a rare narrow-leaved form, unique to the English Midlands, that he had noticed at Banbury and Fineshade, Northamptonshire, which he named 'Plot's Elm' after the Oxford botanist Robert Plot. Claridge Druce served on Oxford City Council from 1892 until his death, and was Chairman of the Public Health Committee. He served as Sheriff of Oxford during 1896–97. He presented the City of Oxford with the Sheriff's gold chain and badge, kept in the Town Hall, to commemorate the Diamond Jubilee of Queen Victoria in 1897. Druce served as Mayor of Oxford in 1900–01. A stone marking the city boundary at the top of Cuckoo Lane in the east Oxford suburb Headington was erected at the time and is engraved with his name. In 1920, Druce was made an Alderman and a portrait in his robes can be seen in the Council Chamber. He was a Fellow of the Royal Society and a Justice of the Peace. In 1909, Druce moved to 9 Crick Road. He named the house "Yardley Lodge", after the village in which he spent his youth. He died at his home aged 81 and was buried in Holywell Cemetery. The standard author abbreviation Druce is used to indicate this individual as the author when citing a botanical name. 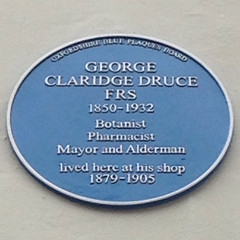