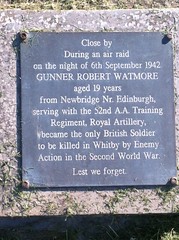 Close by during an air raid on the night of 6th September 1942 Gunner Robert Watmore aged 19 from Newbridge Nr. Edinburgh, serving with the 52nd A.A. Training Regiment, Royal Artillery, became the only British Soldier to be killed in Whitby by Enemy Action in the Second World War. Lest we forget.

North Promenade - Near Metropole Hotel, Whitby, United Kingdom where they was killed (1942)