The Great Orme Tramway (Welsh: Tramffordd y Gogarth) is a cable-hauled 3 ft 6 in (1,067 mm) gauge tramway in Llandudno in north Wales. It takes passengers from Llandudno Victoria Station to just below the summit of the Great Orme headland. This is Great Britain's only remaining cable-operated street tramway, and one of only a few surviving in the world, and it is owned by Conwy County Borough Council. The line comprises two sections, where each section is an independent funicular and passengers change cars at the halfway station. Whilst the upper section runs on its own right of way and is very similar to many other funicular lines, the lower section is an unusual street-running funicular. Whilst the street running section resembles the better-known San Francisco system, its operation is quite different in that it adheres to the funicular principle where the cars are permanently fixed to the cable and are stopped and started by stopping and starting the cable, unlike San Francisco where cars attach to, and detach from, a continuously running cable. As such, this section's closest relatives are Lisbon’s Glória, Bica, and Lavra street funiculars. 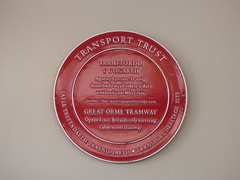