Raffaello Romanelli (13 May 1856 – 3 April 1928) was an Italian sculptor, born in Florence, Italy. The son of Florentine sculptor Pasquale Romanelli, Raffaello is fore-mostly known for his monuments and portrait busts dedicated to noteworthy figures. He worked around the globe in America, Argentina, Austria, Cuba, England, France, Germany, Italy, Romania and Russia.Raffaello worked from two studios both located in the ‘Oltrarno’ district in Florence, initially from the family studio in and then from a new one in . Both studios were former churches: after being deconsecrated, they were converted into sculpture studios to make use of the ample space provided by the high ceilings. The atelier in still houses the Romanelli Sculpture Studio and Gallery, an active studio with Raffaello's portraiture legacy being continued by his great-great-grandchildren. 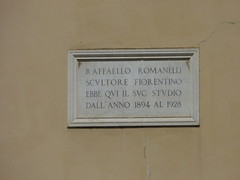 English translation: Raffaello Romanelli Florentine sculptor He had his studio here from 1894 to 1928 [Google Translate]