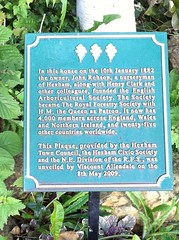 In this house on the 10th January 1882 the owner, John Robson, a nurseryman of Hexham, along with Henry Clark and other colleagues founded the English Arboricultural Society. The Society became the Royal Forestry Society with H.M. the Queen as Patron. It now has 4,000 members across England, Wales and Northern Ireland, and twenty-five other countries worldwide.

, Hexham, United Kingdom where they founded (1882)