William Clarke (24 December 1798 – 25 August 1856) was an English cricketer and team manager who played first-class cricket from 1826 to 1855. He founded, managed and captained the All-England Eleven. He has been described as "one of certain figures who, in the history of cricket, stand like milestones along the way". Clarke was born at Nottingham and died at Wandsworth in Surrey. In the late 1820s, he lost sight in one eye after being struck there by a fives ball on the court behind the Bell Inn in Nottingham. 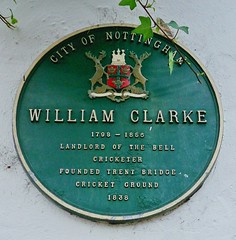 This, the county ground of the Nottinghamshire Cricket Club famous throughout the world as "Trent Bridge" was originally a meadow adjoining the old Trent Bridge Inn at the time when its landlord was William Clarke the incomparable slow bowler later to earn the honoured title of Father of Nottinghamshire Cricket. The ground prepared by him was opened on May 28 1838 The first inter-county contest to be fought here being between Nottinghamshire and Sussex on July 27 & 28 1840 since when, as the scene of Nottinghamshire matches and Test matches its history has been steadily illustrious.