Thomas Carlyle (4 December 1795 – 5 February 1881) was a Scottish cultural critic, essayist, historian, lecturer, mathematician, philosopher and translator. Known as the Sage of Chelsea, he became "the undoubted head of English letters" in the 19th century. Carlyle's works amount to thirty volumes, most of which are in the genres of history and the critical essay. His distinctive style, called Carlylese, is rich in vocabulary, humor and allusion; his writing has been described as proto-postmodern. His early essays and translations single-handedly introduced German Romanticism to the English-speaking world. In his histories, Carlyle drew lessons from the past in order to impart wisdom upon the present, using contrast to illuminate problems as well as solutions. He championed the Captain of Industry (for whom he coined the term) and such figures as Oliver Cromwell and Frederick the Great, writing that "Universal History, the history of what man has accomplished in this world, is at bottom the History of the Great men who have worked here." He rejected materialism and utilitarianism, referring to economics as "the dismal science". Carlyle has often been regarded as a prophet. Immensely influential, his work shaped such varied areas of thought as Romanticism, transcendentalism, medievalism, socialism, Irish rebellion, Southern secession, aestheticism, the Arts and Crafts movement, and fascism; he occupied a central position in Victorian intellectual life. His reputation fluctuated in the 20th century, depreciating during the Edwardian era, reviving in the interwar period, and withering in the years that followed the Second World War. Activity in the field of Carlyle scholarship has increased since the 1960s, with studies, journals, and critical editions of his œuvre in steady production. 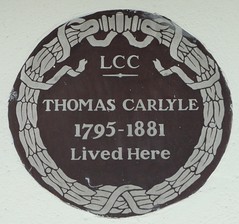 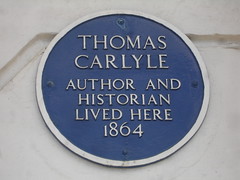 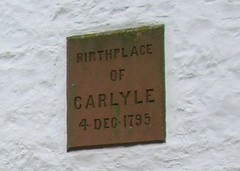 High Street, Ecclefechan, United Kingdom where they was born (1795)

In honour of Thomas Carlyle 1795-1881. Historian, author of The French Revolution, alumnus and Rector of the University.