Borough Engineer and Member of the Institution of Civil Engineers

Sidney Little, MICE (1885–1961) was a civil engineer. He was born in Carlisle and after working in Ipswich as the Borough Engineer he was appointed in Hastings East Sussex UK as the Borough & Water Engineer in 1926, that later included the role of Borough Planning Officer, where he worked for 24 years. During that time, he was responsible for implementing a number of major projects in the town. Known on the South Coast of England as "The Concrete King", Little had great knowledge of reinforced concrete and many of his projects used this material. Improvements to the "Front Line" sea defences allowed the creation of the first underground car parks in the UK. Also a covered 1,500 feet (455 metres) promenade between Hastings pier and Warrior Square, completed in April 1934 as part of the town's sea defences was created using concrete panels containing thousands of coloured glass fragments for decoration which became known locally as "Bottle Alley". Other concrete projects included the construction of a large open air bathing pool at West St Leonard's with a set of double decker seaside chalets in concrete. The White Rock Baths were reconstructed along with several other municipal projects such as the conversion of Johns Place into a museum and plans for an aerodrome at Pebsham St Leonards on Sea UK. He was unpopular with some people because of his willingness to clear areas of historic buildings for road creation schemes, but his most important work was with the water supply to the town of Hastings & St Leonard's with the construction of deep tunnelled aqueducts up to 200 feet deep and the construction of Powdermill, Darwell and reservoirs to supply water. Also the improvement and provision of sewers throughout Hastings. Between 1940–44, Little's expertise was used by the Ministry of Defence where he worked with the Admiralty on the creation of huge concrete Mulberry Harbour that were used for the D Day landings. He designed above ground sea front shelters constructed from reinforced concrete. Sidney Little M.I.C.E. who was granted freedom of the Borough of Hastings in 1960, died in 1961 at age 76. 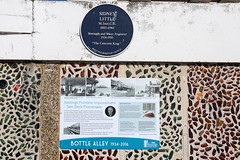