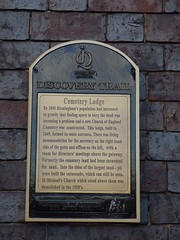 Cemetery Lodge By 1845 Birmingham's population had increased so greatly that finding space to bury the dead was becoming a problem and a new Church of England Cemetery was constructed. This lodge, built in 1849, formed its main entrance. There was living accommodation for the secretery on the right hand side of the gates and offices on the left, with a room for director's meetings above the gateway. Formerly the cemetery land had been excavated for sand. Into the sides of the largest sand - pit were built the catacombs, which can still be seen. St Michael's Church which stood above them was demolished in the 1950's.