James Harry Lacey, (1 February 1917 – 30 May 1989) was one of the top scoring Royal Air Force fighter pilots of the Second World War and was the second highest scoring RAF fighter pilot of the Battle of Britain, behind Pilot Officer Eric Lock of No. 41 Squadron RAF. Lacey was credited with 28 enemy aircraft destroyed, five probables and nine damaged. 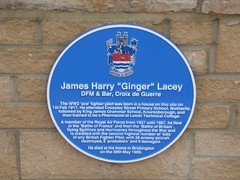 James Harry "Ginger" Lacey DFM&Bar Croix de Guerre. The WW2 'ace' fighter pilot was born in a house on this site on 1st Feb 1917. He attended Crossley Street Primary School, Wetherby, followed by King James Grammar School, Knaresborough, and then trained to be a pharmacist at Leeds Technical College. A member of the Royal Air Force from 1937 until 1967, he flew in the 'Battle of France' and then the 'Battle of Britain', flying Spitfires and Hurricanes throughout the War and is credited with the second highest number of 'kills' of any British Fighter Pilot with 28 enemy aircraft destroyed, 5 'probables' and 9 damaged. He died at his home in Bridlington on the 30th May 1989

Aldi, Wetherby, United Kingdom where they was born