LGBT (or GLBT) is an initialism that stands for lesbian, gay, bisexual, and transgender. In use since the 1990s, the term is an adaptation of the initialism LGB, which was used to replace the term gay in reference to the LGBT community beginning in the mid-to-late 1980s. Activists believed that the term gay community did not accurately represent all those to whom it referred. The initialism, as well as some of its common variants, have been adopted into the mainstream as an umbrella term for use when labeling topics pertaining to sexuality and gender identity. For example, in a comprehensive study of community centers around the United States which offer specific services to members of the LGBT community, the LGBT Movement Advancement Project used the term "LGBT community centers". The initialism LGBT is intended to emphasize a diversity of sexuality and gender identity-based cultures. It may refer to anyone who is non-heterosexual or non-cisgender, instead of exclusively to people who are lesbian, gay, bisexual, or transgender. To recognize this inclusion, a popular variant adds the letter Q for those who identify as queer or are questioning their sexual identity; LGBTQ has been recorded since 1996. Those who add intersex people to LGBT groups or organizing may use the extended initialism LGBTI. These two initialism are sometimes combined to form the terms LGBTIQ  or LGBT+ to encompass spectrums of sexuality and gender. Other, less common variants also exist, with some being an extreme in length; this can result in initialism over twice as long, which has prompted criticism. 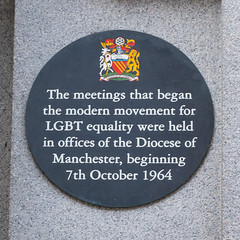 The meetings that began the modern movement for LGBT equality were held in the offices of the Diocese of Manchester, beginning 7th October 1964

Church House, 90 Deansgate, Manchester, United Kingdom where it was